LLVM is super cool and incredibly powerful. For my compilers course this past semester, we had to implement an optimization pass on LLVM IR to remove trivially dead code.

Our pass took a snippet of C code (like seen below) and identified the dead lines of code (the lines that contribute nothing to the result).

Using a well-known liveness/data-flow algorithm, dead variables can be computed, and subsequently removed from the LLVM IR. The algorithm involved building up sets (which I stored as LLVM::BitVector) to represents each variable’s uses, definitions, successors. Those could be used to iteratively generate and understand the data flow (the inSets and outSets), which iteratively uncovered code that was trivially dead. Using the LLVM API, lines of the LLVM IR could be removed from the source. This process would be run until convergence, at which point we’ve (hopefully) eliminated all the dead code!

Throughout this project I learned a lot about C++ development, as well as interfacing with a powerful framework such as LLVM. Below are some tips i’ve gathered while working through this assignment!

Parsing out the name of an LLVM Value

The LLVM IR assigns virtual registers to instructions sequentially as needed. As a result, you can’t simply get the name of an instruction (using i->getName(), generally returned nothing, or <badref>). The assignment required we capture those instruction names to do further calculation. The workaround is to utilize llvm’s ostream class. To print the virtual register of some instruction instr (i.e %0 = icmp slt i32 %a, %b) you can do the following. Note that Instruction is a subclass of Value in LLVM.

I ended up creating a function to run this operation whenever needed.

Just because we’re building an IR pass, doesn’t mean we can’t utilize existing ones! To remove trivially dead code it is important to understand the predecessor and successor blocks for a block of code you’re dealing with. I also had to conceptualize where PHI blocks could be used. For this, I found a graphical representation was very helpful. Luckily, one such pass in LLVM lets you do just that! 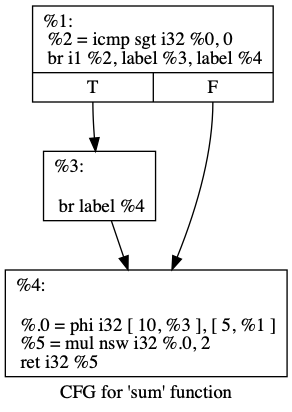 This photo is the output of the dot command above!

Debugging code is never fun. Debugging LLVM passes are really not fun. Thankfully the LLVM website has a giant page titled Source Level Debugging with LLVM - a page I appreciated a lot during this project. My favorite section was Object lifelines and Scoping, where it is explained how to encode line numbers into LLVM source from a compiled C program. This is amazing to me, and really demonstrates the power and extensibility of LLVM!

This is less an LLVM tip, and more so just a C++ tip in general. I had lots of print statements helping me debug my bitvectors along the way.

This is just a snippet of my debug messages…I know - a mess. It was, however, a good way to get feedback on the assignment and compare my output with what I expected to get after running the algorithm by hand.

To suppress this output I utilized C++ macros. At the top of my .cpp file I placed:

All of my debug statements were wrapped in DEBUG_MSG()

and thus could easily be toggled on and off! There’s probably a more “correct” way to do this, but I found this solution simple and effective.